At first I got rejected on my fourth submission with the exact same motivation as the last time. "Specifically, we noticed your app's main concept is to pull down people's pants." even though I had changed so it wasn't even possible to pull down pants anymore. So I figured they hadn't even played the new version or read my messages. So I tried to contact them and complain that the latest version didn't get a fair review and say it wasn't possible to pull down pants and there was no nudity and that frankly it wasn't more sexual than an average 1920's comedy. After a few days The games status was in review again and shortly after it was available on sale on the iTunes. It still has a 17+ rating though which is rather silly, but I don't dare try to change it...

Now it will be interesting to see if the sales will be worth all the trouble.
Posted by beril at 07:12 1 comment:

Today is the international No Pants Day; a perfect time to play Trouser Trouble.

Anyway, I've just submitted a fourth version to Apple, and completly changed the game this time. You can no longer pull down pants at all. Instead people are walking by and their pants are falling off randomly, and the player has to pull them up again. This also removes any variety I had in the gameplay because none of the different level types I had fits with this concept and I haven't bothered to think up any new ones. But whatever. I've stopped caring about quality or sales a long time ago; I just want to see if it gets approved.

I kind of like the new description I wrote for the game though:
"A severe shortage of belts is plaguing the land and everybody's trousers are falling off. Use the touch screen to help pull them up again!"
And the message to the review people
"The game no longer let's you pull down pants. Instead the player provides a valuable service to society by helping to pull up people's pants and cover up the mild nudity."

So I guess it's back to waiting for another ten days or so... though I really should be starting a new project soon.
Posted by beril at 12:28 No comments:

For the last few weeks I've been trying to get Trouser Trouble on the iTunes AppStore and just recieved my third rejection. When I first got the idea for Trouser Trouble I was certain that it would be impossible to get Apple to approve it for release on Iphone, and I only focused on the android version. However once the game was done it was a lot more harmless than I had originaly imagined and after reading Apple's Review Guidelines they actually seemed fairly reasonable I didn't see anything that would really conflict with Trouser Trouble. There's nothing in the guidelines that completely forbids nudity, and the game doesn't really show anything. So I decided to port it straight off and submitted it.

After ten days I got the following feedback:
We've completed the review of your app, but cannot post this version to the App Store because it did not comply with the App Store Review Guidelines, as detailed below: 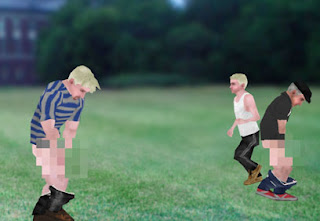 Anyway for my next submission I added a pixelation filter as soon as the player pulls down any underwear. After another ten days I recieved the feedback; the game was no longer pornographic. However, now it violated the following rule : 16.1: Apps that present excessively objectionable or crude content will be rejected. I tried to ask some questions via the resolution center and also made sure that it had the highest possible age rating. But the only response I got was a generic reply saying "We encourage you to review your app content and evaluate whether you can modify the content to bring it into compliance with the Guidelines". Crude and objectionable are pretty vague terms butI did my best to modify the content. I removed the ability to pull down underwear and resubmitted the game.

And so today I have recieved the third rejection. Same rule violation; crude or objectionable content, but this time they have specified a bit more: "Specifically, we noticed your app's main concept is to pull down people's pants.". It only took them three times to notice that... They're still encouraging me to evaluate if I can modify the content to bring it into compliance with the Guidelines though; but I'd think that's pretty hard if their issue is with the main concept.

I'm considering if I should submit another version; where you pull up people's pants instead.
Posted by beril at 21:04 1 comment: