Running a company is exhausting

It's been about a week since we announces the existence of Might and Delight and the announcement has been a really big success. We've recieved a lot of attention on the internet and gotten a lot of positive emails from old BCR-fans, from the press and even from a few publishers. Overall things are moving along a lot faster than I had anticipated. But it's also really stressful, even though we haven't really started working a whole lot yet. We're mainly answering emails and doing some planning so far, and I'm hardly working full time, but I get increadibly stressed whenever I talk business.
Next week I'm going to Malmö for the Nordic Game conference and some pretty important meetings; I'm already extemely nervous and I think it will only get worse the closer we get to the conference.
Posted by beril at 00:03 No comments:

So now it's official. I'm now a co-founder and part owner of Might and Delight AB and our first press release is starting to make it's way through the internet. I'll refrain from writing any personal thoughs about it just now but here's our brand new website that went online today: MightAndDelight.com
Posted by beril at 23:10 2 comments: 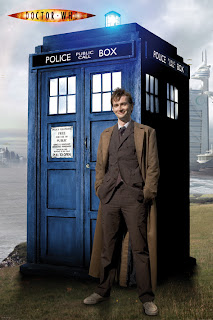 Maybe I ought to explain a bit about my previous post and my Doctor Who fandom as the show isn't really that well known around here or in most of the world. Basicly it's a british science fiction series that has been on the air since the 60s. I didn't really know much about it either until a few years ago when I decided to look it up after seeing some references where I felt my geek knowledge was a bit limited. Even though it's a bit corny and low budget and mainly aimed at kids I instantly got hooked when I started watching; it has a lot of british charm that's just irresistable to an anglophile like myself.

The story follows an alien time/space traveler called The Doctor, who picks up random british people (mainly pretty girls) and travels the universe/time vortex with them in his space ship/time machine called the Tardis which looks like a phone booth from the 60s. Also in order to keep the show going for decades, the doctor's race has the ability "regenerate" (change actor) which is what happened in the new season when the tenth doctor, David Tennant, got replaced with Matt Smith (who I must say fills the shoes very well).

I'm really looking forward to the rest of the new series. I still have about 15 seasons of the original series to work my way through though, but it feels a bit ancient at times.
Posted by beril at 22:05 No comments:

Today begins the new season of Doctor Who. Though David Tennant will be missed I 'm eager to see how the series will evolve under the supervision of one the most brilliant men in television: the writer of Coupling and Jekyll; Steven Moffat.
Posted by beril at 00:55 No comments: