There hasn't relly been much progress on my game lately unfourtunatly; mainly because I haven't been working very much, but also because stuff takes time.

Anyway, I played through Heavy Rain yesterday. There are a lot of nice things you could say about the game; the graphics are really nice, the story is intruiging, the production values are excellent and I definatly like the lack of aliens, zombies and superheroes. However, as a game it fails miserably; for the most part it can be described as watching a decent crime drama while someone is constantly pressing pause and hiding the remote... and sometimes beat you with it. The gameplay very heavy on quick time events (as well as not so quick events where you just have to do a weird button combo to move on) and when you're actually moving around freely the controls are just painful. As for the choices it's hard to know exactly how much you are actually affecting, there are a couple of branches in the storyline, but most of the stuff seems pretty isolated.

It has a couple of technical issues as well; I got three crashes during a single playthrough and when I tried replaying the last chapter to get a better ending the game won't load. Also the game isn't very kind to us SDTV enthusiasts; when you're making choices it's really hard to see the button icons that corresponds to the different alternatives so I had to guess a lot of the time.

Next I'll be playing Ace Attourney Investigations for a very different take on the Crime genre.
Posted by beril at 11:54 1 comment:

The adventures of Lolo

I finally got around to playing the first Lolo game for the NES today (another excellent excuse not to work on my game). It's been on my todo list for years as I've never really played any of them. It was actually a really fun puzzle puzzle game and a decent challenge towards the end; though parts of the ruleset felt a bit arbitrary and illogical at first, and the music is really annoying... 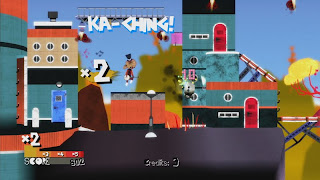 Apparently Fret Nice is finally released on XBLA tomorrow. Woho! So go ahead and buy it, but don't even think about using the guitar controller. While it's unfortunate that the main gimmick doesn't quite work, I still think we did a pretty nice job, given the circumstances and the short development time.

So anyway; I tried doing some optimisation today and implemented some simple profiler tools, but it's really painful to do profiling on PC; the framerate fluctuates about 30% even when I don't do anything. I still managed to find a couple of things to fix, but I'm still worried about how many enemies I'll be able to have, especially if I want it to run on any computer even sligthly older than mine.

Also the plans of starting up a company are moving forward. I'll be heading up to Stockholm again soon to meet with the old engine guys from Grin and have a look at their new engine. I also recieved a mail from Mark Rein, the president of Epic Games, today and I'll have a phone meeting with him to discuss licencing the Unreal engine. It's pretty scary actually; I was just expecting a generic reply from their sales division...
Posted by beril at 21:14 No comments:

Getting tired of art

After my failed attempt at designing an enemy and my general unhappiness with my enviromnent art I felt the need to do something really straight forward today, so I modeled some fruit. All games need some collectable oversized fruits. Some of the textures aren't really finnished and I'm a but worried I made them a bit too low poly, but it'll do for now. I think the normalmaps should be fine even if I add some more polys so it's no biggie. 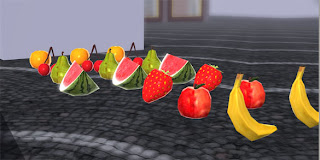 Also today was the first time in ages that I actually did some gameplay code (I made a simple pickup class for the fruits). Even though it was just a tiny bit and really simple and I was still a bit drunk from the monday beer, I realized that I kind of miss it and I'm getting tired of spending so much time on art, but I don't want to work with dummy art either. Even though I really enjoy doing everything myself, it's just so frustratingly slow sometimes.
Posted by beril at 01:58 No comments:

Attack of the Mecha Giraffes

So I got bored with environment art and wanted to do something a bit more silly, so I started working on a mecha giraffe to use as an enemy. Unfourtunatly the design, which was really awesome in my head, looked utterly crappy when I started modeling it... I guess I really ought to start doing some concept sketches before I model stuff.
Anyway, here's an army of half finnished giraffes in game. It'll be the last you will see of them though. 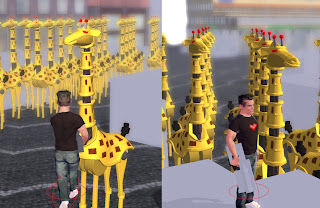 So this was supposed to be the week when I started working seriously on my game, eight hours a day with a fixed schedule. This worked out great on monday, less great on tuesday and since then I haven't gotten any work done... Somehow I've just been too busy; playing Tatsunoko vs Capcom and making kroppkakor are valid excuses to skip work right? Oh well, there's always next week; it's not like I have a deadline.
Posted by beril at 21:23 No comments:

So I've been trying to do some environment art lately which is slow and painful work and I really suck at it. Somehow I end up doing what I hate in other games, relying way too much on normal maps and specular which makes everything look like wet plasic, but it's the only way I manage to make anything that looks even half decent. I don't really have anything new to show yet though.

Anyway I was in Stockholm yesterday, talking with some old co-workers about starting up a company; it looks like things are moving along a bit faster than I anticipated. Among other things we discussed what engine to use. I had to advise against trying to use my engine, as it's nowhere near ready to be used in a commercial project. However afterwards I started regretting this as I'm falling a bit more in love with it every second and I really don't feel like spending lots of time getting familliar with a fancy licenced nextgen engine that. So I'm currently trying to look into the cost of licensing different middleware engines, but I'm secretly kind of hoping they'll all be too expensive so we'll be forced to go with my engine in the end.
Posted by beril at 01:42 No comments:

Okay, so now I have a blog and hate myself ever so slightly for it, but as I'm working alone on this project and there is no one to witness the progress, I feel the need to document the development somehow, and thus I've started this blog. I'll try to update as whenever I have something new to show or whenever I feel like it.

So anyway, I guess I should present the project a bit. Last year, before I started working at Pieces Interactive, I played around a bit with some OpenGL code and made a simple 3D engine. After some short, half finnished projects I put it on ice but have just picked it up again. Apart from the very basic engine I'm also making a game; as I've made a lot of platformers in my days, I felt an urge to try out a genre I haven't had as much experience with, so I'm making a simple third person shooter. The plan it to keep it as simple as possible and really keep the amount of content down to a minimum. So expect a few constantly respawning enemies in a fixed area, but I hope I'll be able to add a bit more crazyness to it than that. I don't really have any grand plans or hopes that this will become the next Halo, or in any way a commercial product for that matter; I'm just hoping I'll be able to create something fairly decent and learn something from it, while enjoying myself at the same time.

Anyway, I haven't gotten very far but here is an early screenshot of a character, a half finnished house, some nice lambert gray and some bloom 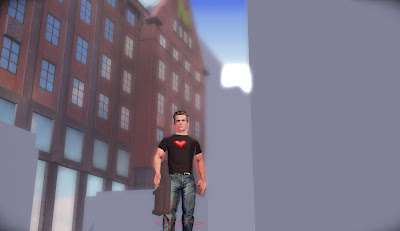