So it's been over a month since Gunman Clives release. The response have been increadibly positive and the sales have been better than I dared hope for (though still not enough to make me rich or even particularly well paid).

I've been meaning to get started on my next game for a while now but I have trouble finding the motivation and getting into the right spirit. I did a few rendering experiments but they turned out rather crappy. After Gunman Clive I'm feeling quite some pressure to deliver another unique stylish look for my next game; and it also needs to be something production effecient and not too GPU heavy to run on weaker devices. No small feat, but I'm trying not to worry too much about it.
Posted by beril at 13:35 24 comments:

I finally submitted Gunman Clive for apple review yesterday, so it won't be long now. The Android version is pretty much done as well; I'll just need to move over the final tweaks I've made, but I'll hold onto it until I can release it on both platforms simultaneously. So next week I'll try to get started on the PC (and possibly Mac) version, but that won't be released until a short while after. I'm not sure how much work that needs to be done on the PC version, the main thing is to add proper PC-centric video options and save functions and replace FMOD with something that doesn't cost money, and of course make sure it runs on a wide range of systems. I'm also thinking of replacing some of the objects with more highpoly versions, but only if I can make it look good with some basic smoothing operation, I don't want to spend a lot of time reworking the graphics.
Posted by beril at 10:38 4 comments:

I've been working on a trailer for the last two days. I had to rush it a bit in hopes of getting it on Sony Mobiles GDC reel (which I still don't know if it will be). The one I sent off to them didn't have the captions though. I have a feeling they don't really portray the game in the best possible light but I got bored with trying to make up impressive sounding selling points. The trailer is still work in progress though; I'm not sure if I'll keep the captions and I also have too work a bit more on the timing and stuff before I send it out to any big sites. 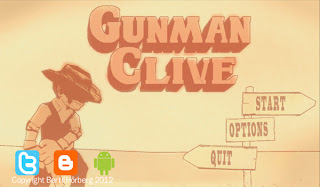 Unless I change my mind very soon this will be the official title of my new game. Still not really sure about the name but it's the best I've got. I had a few rather lame alternatives and then I got the idea to keep the GMC abbreviation somehow, and the first thing that popped into my head was Gunman Clive and somehow it stuck (and yes I know that's technically just GC, not GMC, but whatever).

I ran out of ideas for bosses a bit and resorted to stealing some ideas from old games, and this idea came pretty natural for some reason. It was pretty fun to make this boss though. Although I'm fairly familiar with coding characters with bionic arms it was pretty fun to make the animations for such a character, having been in charge of implementing someone elses swing-animations in the past. And while his moveset is pretty much stolen from bionic commando it was interesting trying to make a boss pattern out of it. I kind of want to make him playable though...
Posted by beril at 23:56 No comments: 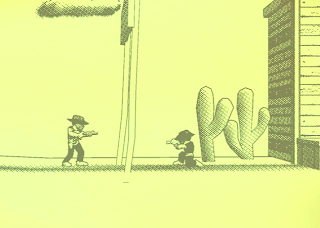 I was a bit bored and didn't feel like starting coding menues today so I played around a bit with my post effects just for fun. Just had to tweak some colours and change a texture to get this effect. I tried rendering it in lower resolution as well to get it more pixelperfect but it just looked worse
Posted by beril at 16:14 2 comments:

Another short video of GMC. This is the first boss in the game. He has a pretty simple behaviour but can still be quite hard to defeat.
Posted by beril at 20:35 No comments:

Short video of an enemy I've just finnished working on.
Gameplay wise it's extremely basic but the art and animation took two days to make. I messed up the proportions a bit and had to do my best to salvage it after the animations were already halfways done. I think it turned out decent in the end.
Posted by beril at 21:50 No comments:

Made a quick fraps video of GMC, showing the beginning of Level 1 and the basic gameplay and showing of the artstyle

Development is going pretty well right now, though I'm getting tired of doing leveldesign. I might upload some more videos, showing some more interesting gameplay in the near future
Posted by beril at 20:25 No comments: