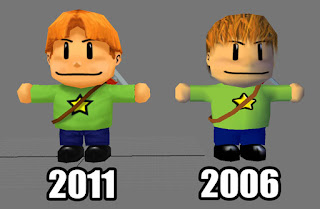 As I mentioned in my last post I've started porting/remaking my old game Helium Boy to Android. Yesterday I did a little update to the main character, and I'm really happy with the results. It's starting to look a lot less like hideous programmer art, so it's nice to see that I've improved a bit in the last five years at least.

The new version obviously doesn't use any lighting, which I think I'll skip altogether in the remake. It also has 30% fewer triangles. If I manage to update the rest of the graphics in a similar fashion I think the game might look rather nice in the end, though that's quite a lot of work and then I still have to make half a dozen levels or so before I can sell it, and I'm prioritizing GMC right now.
Posted by beril at 09:14 No comments: