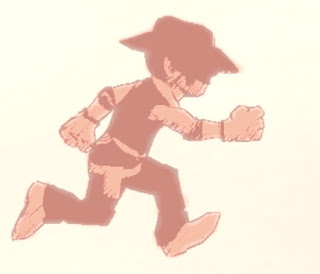 I was playing around a bit with the old rendering demo from my last post and accidentally spawned in the character from project GMC (who I suddenly turned into a cowboy a few weeks ago) without proper textures adapted for this rendering technique, and I absolutely love the result. The thing is, he's supposed to have two textures, one colour texture and one with some details that gets rendered along with the shading and outlines. But he's using his standard texture for the details, which just turned into massive areas of solid shading and for the colour texture he just got whatever texture was used last. In this case it's the texture for the tree trunk which turned him all brown; he also looked quite dashing when he was all green. I've tweaked the texture a bit to make some more details standout before I took the screenshot though.

The look reminds me of something but I can't quite place it. I think it looks a lot better than when I tried doing proper colouring, and somehow it just feels right with the cowboy motif as well.

I'm considering if I should just go ahead and change Project GMC to this style. I'm thinking very sparse environment art that are just outlines with some sketch shading and enemies in this style with just one colour. I'd have to rethink a lot of things, but I'm pretty much stuck anyway and have a hard time finding an identity for the game. This would certainly give it a unique style and it would most likely speed up content creation considerably, but I'm not sure I'd be able to use much of what I have so far, and I don't know how much variation I can make in this style.

I still have to try running it on phones though. It needs to render to a couple of different framebuffers and do some blurring and stuff, which seemed quite slow last time I tried to do stuff like that on iPhone and Xperia.
Posted by beril at 01:50